The Jaclyn Hill x Morphe palette has been the most anticipated palette since Jaclyn finally announced that she was working on a collab with Morphe.

She has been working on this palette for about two years, so it made all of her followers, including me, really excited to see what all the hard-work looked like.

The day of the palette drop I woke up and made sure I was online to get my hands on it. However, I was nervous throughout the whole process because many people were comparing this palette with the Morphe 350 and also saying that the Urban Decay Heat was better. This was crushing me the whole time because when they were doing the comparison yeah you can see some colors that were the same, but you also did see the differences.  Which made it worth it for me to purchase.

I believe every palette is going to look the same when it comes to colors. The color/pigmentation once on the lid is what makes the difference. I buy palettes because I see a nice matte brown, but once applied on the lid it has tons of fall out, powdery, and it looks orange instead of brown.

So keep that in mind when purchasing palettes.

Anyways, I went to the Morphe site right when the drop happened and even though my wifi was down I was still lucky enough to get the palette! The palette didn’t take long to arrive to my home. It took about a week which is fast compared to others that at times take two weeks.

I was still feeling nervous receiving the palette because I was afraid that all the negative comments were true because I’ve been watching Jaclyn Hill for the last 5 years! I’ve always adored her cheery, friendly, and diverse personality as she grew in the industry. She doesn’t do many collabs so I wanted this to be a success for her.

Which I’m glad it was!

The packaging was classy and beautiful. I really liked the fact that the actual palette came in a cardboard box type material instead of Morphe’s typical black plastic material. Doing the swatches the formula felt soft and creamy. The swatches you see below were from one swipe and one swipe on the hand. You can tell the pigment is there.

One of my favorite colors in the palette is “Hustle” because I feel like I’ve never seen a color like this. It’s silver, but not and a hint of lavender. It’s so beautiful!!! (fourth row-third color)

I tried the colors on the lid and so far they look to part. They don’t switch up on you and there wasn’t any fall out!

I tried to take a pic, but honestly I haven’t been wearing makeup since it’s so hot and I’m close to having Jean that I get a bit tired. Hopefully next post I will be able to show a nice makeup look using this wonderful palette!

I know they will be doing a restock, so if you didn’t get this palette, I recommend it! Also if your not a “makeup” type person. Who’s afraid to use different colors, this palette has your transitions, your matte nudes, and your glitters. This palette can be used to practice more on your blending or trying different colors and seeing what colors go well with you. So it’s not a waste of money. 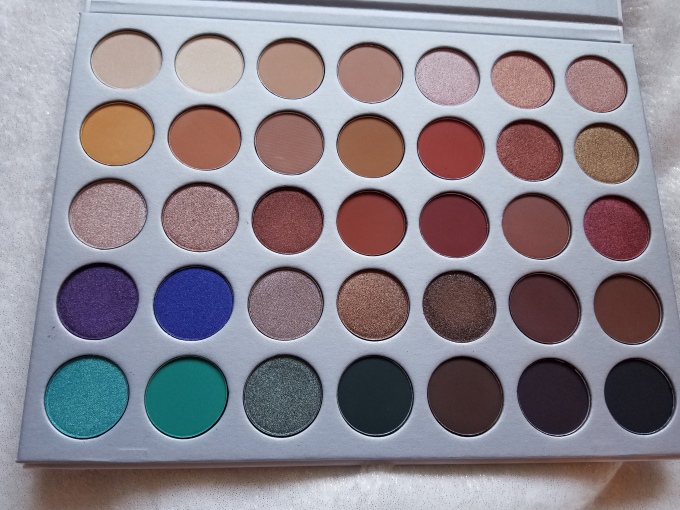 Alongside this palette I also picked up a brush set. I’ve never used Morphe’s brushes, but you know if you watch Youtube MUA then you know that many use Morphe’s brushes as there go to, so I also wanted to see the hype about that. I got the brushes the same time as the palette.

So far I like them because the bristles are soft, soooooooo good and helpful when it comes to blending, and the brushes are actually really long. I compared some of my other brushes and the size difference was noticeable. My typical brushes were about half the size. Which I like that the Morphe brushes are longer because I at times when I’m applying eye-shadow I touch my face and I get colors on my cheeks or even finger prints on my foundation while its drying, so I really like them.

One weird thing is that my brushes and the case it came with smelled like paint. As if they just painted it. I don’t mind it, just thought it was weird lol

Till then, who else got this palette, like it so far? xoxo